by Jim Gressinger on Aug. 01, 2012, under Southern Arizona Mexican Restaurants,Things To Do In Bisbee 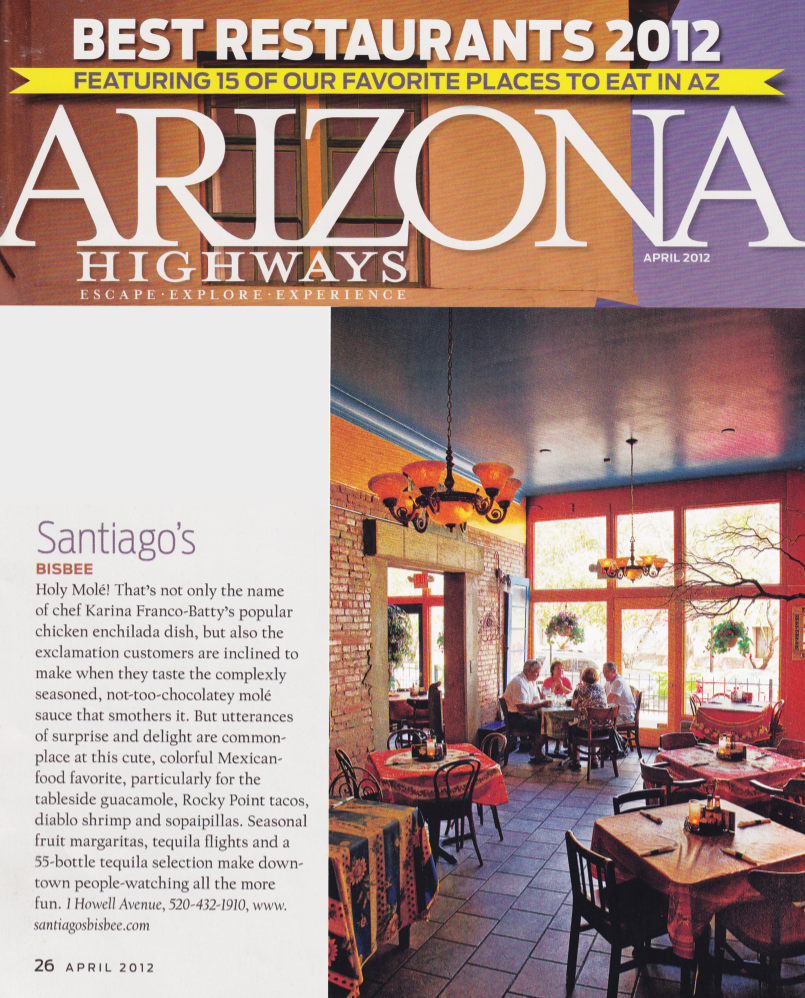 The Bar At Santiago’s in Old Bisbee
July 2012
Just about every time I have gone to Bisbee over the past year I have tried to dine at Santiago’s Mexican Restaurant. However, something always managed to spoil my plans…until last week.
Ambiance
I had heard a lot of positive comments about Santiago’s as I wandered Old Bisbee taking photographs and talking with the natives. Now I know why. Just walking in the front door will put a smile on your face. The interior is light and colorful, even playful. Very Mexican in the best possible sense. Santiago’s is a happy place.
History
Santiago’s is also a historic place. The restaurant is located on the ground floor of the San Ramon Hotel. I have not stayed there yet, but owner/manager Tamara Page give me a quick tour that morning. Looked to me like a fine old hotel in a prime Old Bisbee location.
The red brick building is of 1902 vintage at the base of Brewery Gulch and OK Street. While places like the San Ramon have a million stories, one in particular caught my attention.
The old building, restored and well-maintained, had, over the previous century, been at various times a: grocery store, pharmacy, miners’ bath house, barber shop, mercantile, Moose Lodge, tortilla factory, and a hay, coal, and firewood outlet.
When the present owners were purchasing this property, they came across a familiar name in a report that listed the previous owners and tenants. Seems the proprietor of the Central Pharmacy, located here in 1912, was a Frenchman, Leonnard Vigneaux.
Up until that moment, the aspiring new owners had no idea that their great-grandfather, Leonnard Vigneaux, had been here before them. Leonnard married Maria Enriqueta Rivera Baz in 1907, most likely in the Presbyterian Church up the street where, nearly a hundred years later, the current owners exchanged vows.
WOW! Stories like that give me goose bumps.
Staff
Clearly, Santiago’s staff had been very well selected & trained, a testament to good management. They were (a) professional; (b) personable; (c) quick-witted, and (d) helpful in choosing just the right margarita (6 at last count & w/premium tequila if you wish) to go with any of the dozens of meal choices. Now, how many dining establishments can boast this combination of delightful ambiance, amazing history, & personable, efficient staff? Sadly, too few.
But wait! What about the food?
We have now arrived at the best part. Santiago’s offers a lot of typical Mexican dishes: enchiladas, tacos, burritos, fajitas, chimichangas, tamales, moles, & chili rellenos with assorted meats: pork, chicken, beef, and seafood, including shrimp.
I know what you’re thinking. So does just about every Mexican restaurant in Southern Arizona. What’s so special about Santiago’s?
Flavor. No, I mean BIG FLAVOR. And no, I don’t mean a lot of flavor as a result of super-hot chili peppers either. Flavor is actually a misnomer. Flavor(s) plural is more accurate. Santiago’s chef seems to have the magical touch of blending traditional and her unique, but mysterious flavors that make “just a taco” exceptional.
In addition to a fine taco, I should mention a few other consumables of note. My lunch also included a corn tamale. Was it as good as the ones at the Tucson Tamale Company on Broadway (see review). Not sure. But would hate to have to live on the difference.
For a drink, I had Santiago’s regular margarita (with salt) that arrived on my table moments after my waitress brought me fresh chips and a tasty salsa. Excellent timing. Excellent salsa.
I had considered ordering one of their special margaritas with a premium tequila. But as this was only suppose to be a light lunch, I exerted exceptional willpower. I can tell you that Santiago’s regular margarita is as good as the regular margaritas you will find at Southern Arizona’s best Mexican restaurants … and I mean that as high praise.
As I was finishing my “exceptionally flavorful” taco, I asked to see the owner or manager. Suzanne Page, owner AND manager, presented herself shortly. I told her that I publish Southern Arizona Guide and want to compliment her on her wonderful restaurant.
It took me a moment to realize that Suzanne Page is the sister-in-law of Tamara Page, the nice lady upstairs who had earlier that morning given me a tour of the hotel. Apparently, these ladies are married to a pair of brothers named Page, Mike & Rob. Or so they say. I never met the guys, so cannot confirm this rumor.
I don’t usually introduce myself when doing a review. I don’t want any special favors. And I always pay for my meal. No comps. But I didn’t think introducing myself would hurt just this once. After all, I was enjoying a very good lunch experience. 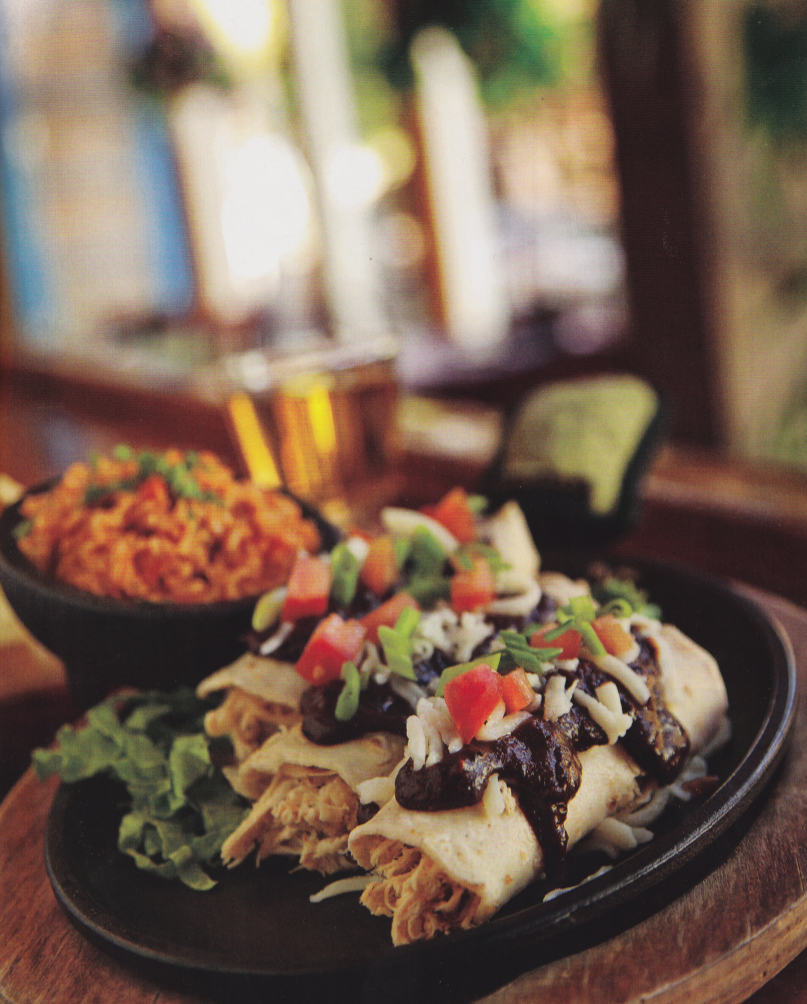 The Molcajete Experience
Suzanne & I had chatted for a while when she “suggested” I try their “molcajete”. At her “suggestion”, the word went to the kitchen to prepare a Santiago’s Molcajete. I had just had a very good lunch and now I was going to at least sample a dish that I had never heard of. Oh, the sacrifices I make for you people.
While we awaited my molcajete, Suzanne explained that it’s a traditional dish in Oaxaca, Mexico, but her chef adds a flair of her own.
Ingredients include: steak & sautéed jumbo shrimp served atop an ancho chipotle chili stew with grilled red & green peppers, Oaxacan cheese & organic quinoa garnished with fresh limes and pico de gallo, plus some secret ingredients that the chef won’t even reveal to her.
FYI: according to Wikipedia, that source of all modern knowledge, the pobiano is a mild chili pepper originating in the Mexican state of Puebla. When it’s dried, it’s called a chili ancho (“wide chili”)
Well, I like steak. And I like shrimp. How bad could it be, thought I?
My molcajete arrived with a flair of its own. This “stew” comes in a VERY HOT volcanic lava bowl … so hot that as it was set on my table it bubbled like a witch’s caldron. This was either going to be the Mexican dish to beat all Mexican dishes, or a disaster.
I asked Suzanne how it’s suppose to be eaten. She shoved the little basket of fresh corn tortillas my way and told me to put a piece of steak or shrimp and some of the juices on one, roll it up, and take a bite … kinda like a bubbling taco.
I know is sounds silly that I should have to inquire as to how one should eat such a dish, but experience tells me that when I have never seen anything like it and the food is still moving (bubbling), it’s best to ask.
I neatly placed a jumbo shrimp on my tortilla with a liberal helping of whatever else was in that stew and took a bite. The mixture of flavors was both surprising and delightful. But it was only one bite. I wasn’t ready yet to commit.

I asked to meet the chef so I could express appropriate homage. Chef Karina Franco-Batty arrived at my table. She is obviously a modest woman, but with a sure sense of her extraordinary cooking skills. She seemed pleased that I like her cooking and agreed to let me take her photograph. I was honored.

I tried another, this time with a bite of steak instead of shrimp. The meat was well-marinated and very tender. And amazingly flavorful. This was indeed special.
Santiago’s Mexican Restaurant is now on my alter dedicated to the best of the best Southern Arizona Mexican Restaurants along with Tucson’s Theresa’s Mosaic Café, El Charro Café Downtown on Court Street, Café Poca Cosa on Pennington, and Tubac’s Elvira’s.  When you’re in Bisbee, definitely have lunch and/or dinner at Santiago’s. And say “Hi” to Suzanne & Chef Karina for me. I’ll be back in August.
For all of our dining reviews, including our 2012 List of the Best Restaurants in Southern Arizona (by category), go to SouthernArizonaGuide.com. I’ll be adding Santiago’s here next week.
For more Things to See and Do: visit SouthernArizonaGuide.com

Check our Facebook page for up to date information and specials!